New York Post columnist and former Times reporter Michael Goodwin wrote, “because it (The Times) demonized Trump from start to finish, it failed to realize he was onto something. And because the paper decided that Trump’s supporters were a rabble of racist rednecks and homophobes, it didn’t have a clue about what was happening in the lives of the Americans who elected the new president.Sulzbergers letter was released after the paper’s public editor, Liz Spayd, took the paper to task for its election coverage. She pointed out how its polling feature Upshot gave Hillary Clinton an 84 percent chance as voters went to the polls.She compared stories that the paper ran about President-elect Donald Trump and Clinton, where the paper made Clinton look functional and organized and the Trump discombobulated.Spayd wrote, “Readers are sending letters of complaint at a rapid rate. Here’s one that summed up the feelings succinctly, from Kathleen Casey of Houston: “Now, that the world has been upended and you are all, to a person, in a state of surprise and shock, you may want to consider whether you should change your focus from telling the reader what and how to think, and instead devote yourselves to finding out what the reader (and nonreaders) actually think.”She wrote about another reader who asked that the paper should focus on the electorate instead of “pushing the limited agenda of your editors.”“Please come down from your New York City skyscraper and join the rest of us.”Sulzberger—who insisted that the paper covered both candidates fairly– also sent a note to staffers on Friday reminding the newsroom to “give the news impartially, without fear or favor.”“But we also approach the incoming Trump administration without bias,” he said. 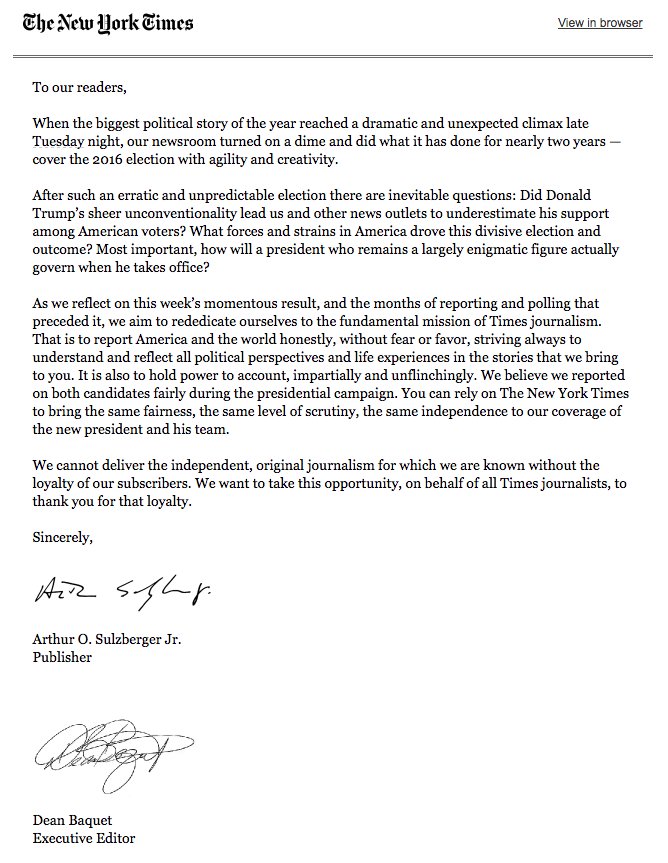 CCO EDITOR FOOTNOTE:  This Op-Ed article was written by the NEW YORK TIMES Publisher, Arthur O. Sulzberger Jr. and Executive Editor Dean Baquet.We would like to thank our daily poster Joe Biden for sending this most interesting find.  We repost this article sent to us by JoeBiden without opinion, bias or editing.FacebookTwitterCopy LinkEmail

New York Times Publisher And Editor Vows To ‘Rededicate’ Paper To Reporting HonestlyThe publisher and editor of The New York Times penned a letter to readers Friday promising that the paper would “reflect” on its coverage of this year’s election while rededicating itself to reporting on “America and the world” honestly.Arthur O. Sulzberger Jr., the paper’s embattled publisher, appealed to Times readers for their continued support.“We cannot deliver the independent, original journalism for which we are known without the loyalty of our subscribers,” the letter states.Letter to NYT readers from Arthur Sulzberger Jr. and Dean Baquet

An undisclosed pension fund in the Benelux region has tendered a €250m global high-yield mandate using IPE Quest.According to search QN-2085, the pension fund prefers an active manager adopting a core investment style.Managers should have a minimum of €2.5bn in global high-yield assets under management (AUM) and €2.5bn in total AUM.Investments should be benchmarked against the BofA Merrill Lynch Global High-Yield Bond Index and have a tracking error of no more than 5%. Interested parties should have a minimum track record of three years, although five is preferred.Applicants should state performance, gross of fees, up to the end of March.A shortlist will be drawn up on 17 August, with the deadline for RFPs being 1 September. A final decision will be made at the beginning of December.The IPE news team is unable to answer any further questions about IPE Quest tender notices to protect the interests of clients conducting the search. To obtain information directly from IPE Quest, please contact Jayna Vishram on +44 (0) 20 7261 4630 or email [email protected]

Indiana unemployment continues to be lower than national average

Indianapolis, IN—The Indiana Department of Workforce Development reports that the state’s unemployment rate stands at 3.2% for October.  That is lower than the national average of 3.6%.The State labor force showed a net increase of 567 residents over the last month. The result came due to a decrease of 1,397 unemployed residents and an increase of 1,964 residents who were employed.Indiana’s total labor force, which includes both employed citizens and those seeking employment, stands at 3.38 million. The state’s 64.4% labor force participation rate remains above the national rate of 63.3%.